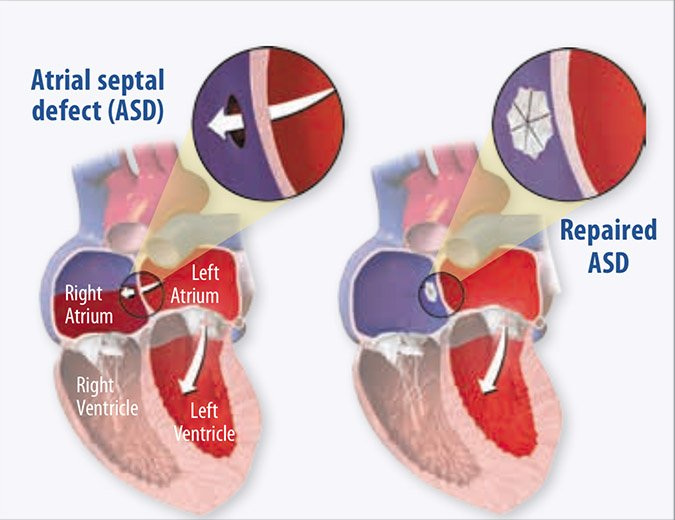 It seems hard to believe that you can have a hole in your heart and not know it. But some people born with an atrial septal defect (ASD) live well into adulthood before developing symptoms that alert them to a problem.

An ASD is a hole in the wall (septum) that divides the upper right and left chambers of the heart (atria). It is the most common form of congenital heart disease in adults. A developing fetus has several such holes (called cardiac shunts), which normally close naturally around the time the baby is born. A large hole stresses the heart by allowing blood to flow in the wrong direction, enlarging the heart’s chambers.

“The hole causes oxygenated blood to flow from the higher pressure left side of the heart to the right side, where it mixes with poorly oxygenated blood. Over time, it causes right-heart enlargement and, if the shunt is large, possibly heart failure, arrhythmias or pulmonary hypertension,” says David Majdalany, MD, Director of the Adult Congenital Heart Disease Center at Cleveland Clinic.

There are four types of ASD. Thanks to modern techniques and technology, the most common type—a secundum ASD—can often be repaired in a catheter-based procedure, rather than in open-heart surgery.

Early Symptoms Can Be Subtle

Although ASDs are present at birth, a baby may not have symptoms from an ASD that fails to close. However, a heart murmur may be present. The murmur may be subtle and not easily heard with a stethoscope.

As the child grows into adulthood, more prominent symptoms may begin to appear. They can include fatigue, shortness of breath, swelling in the legs and ankles and palpitations. If a murmur can be heard, such symptoms should prompt a physician to order an echocardiogram to screen for an ASD.

Unfortunately, some people first learn about their ASD when they suffer a stroke.

Patching the Hole without Surgery

Medications can be used to manage many symptoms of ASD, including arrhythmias, fluid retention and elevated lung pressures. But the only way to prevent potentially serious complications is to close a large ASD as soon as possible.

Because the three less-common forms of ASD are generally accompanied by one or more additional defects, all repairs are usually done in a single open-heart operation.

Because a secundum ASD usually exists alone and is located in the middle of the septum, it can usually be repaired in a catheter-based procedure.

Living with a Repaired ASD

After ASD repair, your heart must be monitored periodically to ensure the occluder stays firmly in place, blood flow between the atria has stopped and the enlarged heart normalizes in size.

“If your ASD is repaired before age 25, you have an excellent chance of leading a normal life,” says Dr. Majdalany. “Individuals with ASDs closed in adulthood—mostly after age 40—are at increased risk of developing irregular rhythms, such as atrial fibrillation, and require periodic follow-up. We usually follow patients a couple times the first year, then every couple of years thereafter, with an EKG and an echocardiogram.”

Patients with an ASD that has been closed with an occluder typically take blood thinners, such as aspirin and/or clopidogrel (Plavix), for a few months and aspirin for life. 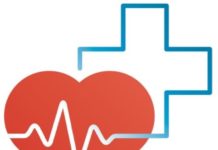